On June 15, the next to last day of the ride, bikers will cruise from Moberly to Mark Twain Lake, stopping for the night to camp near Clarence Cannon Dam. The 68-mile route that day includes traveling in Amish country; a ride through one of Missouri’s four covered bridges; a jaunt to Mark Twain’s birthplace in Mark Twain State Park; and touring through the small communities of Paris and Perry before stopping for the night at the Briscoe Group Camp near the M. W. Boudreaux Visitor Center and Clarence Cannon Dam.

Entertainment and a wide variety of food and other vendors will be on site for cyclists and visitors to enjoy at either the M.W. Boudreaux Visitor Center or South Spillway Recreation Area.

The Big BAM route winds through the best rural roads in Missouri combining beautiful sights and small town hospitality. The 2017 route covers 338 miles in 6 days. With an average mileage of around 56 miles per day, the route can be challenging, but is always rewarding.

The adventure starts with a pre-ride party in historic Weston next to the Missouri river near where Lewis and Clark camped on their westward journey. Then the riding begins on June 11 heading east to our final destination of another historic town, Louisiana, on the Mississippi River on June 16.

From Weston, riders will head into Jesse James country and stay overnight at the Jesse James Park and Amphitheatre in Kearney.

June 12, they’ll ride through Watkin’s Mill State Park, and after crossing the Missouri River, will wind up in Lexington, camping next to the Civil War battlefield of the Anderson House State Historic Site.

On June 13, riders will traverse across the rolling countryside and end at the Missouri Valley College in Marshall.

On June 14, they’ll cross back over the Missouri river at Glasgow and then spend the night at Rothwell Park in Moberly.

On June 15, participants get to ride through a covered bridge and Mark Twain’s birthplace at Mark Twain Lake, before camping next to Clarence Cannon Dam.

The last day’s ride will take cyclists on into Louisiana and a grand finale party alongside the Mississippi.

That’s six days of riding across some beautiful pristine countryside. The route will stay on hard-surfaced roads with minimal traffic. And don’t forget the parties at each of the seven overnight towns where there will be a concert and festival every night.

For the 2017 Big BAM,  discounts to teams of 4 or more riders are available. Just contact info@bigbamride.com to get started.

Or you can also watch for updates on ExploreMarkTwainLake.com or the Explore Mark Twain Lake Facebook page. 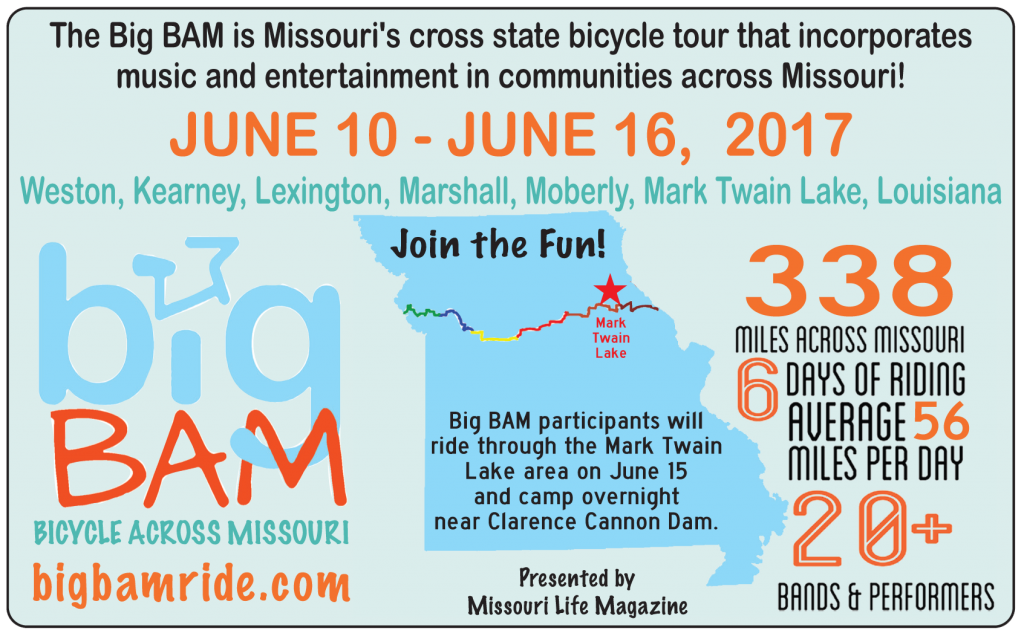