“Hunters should generally expect similar opportunities as those during the past several seasons,” said MDC Turkey Biologist Jason Isabelle. “Two-year-old gobblers won’t be as abundant as they were in 2014 in most areas due to lower poult production in 2013, but carry-over from previous years should provide some great hunting.”

“With good poult production from 2014, jake numbers should be up in northern Missouri this spring, but harvesting an adult gobbler will continue to be a bit more challenging given the decline in bird numbers that the region experienced during the mid-to-late 2000s,” he said.

“Turkey numbers in the Ozarks have been relatively stable for the past several years and the eastern Ozarks has had some of the state’s best turkey production,” Isabelle said. “With good poult production in recent years, we’ve started to see turkey number increase in several southern Missouri counties. Good gobbler numbers and an abundance of public land make this region a good choice for hunters. The western Ozarks and border region further west are likely to have some of the top harvest counties in the state this year.”

He added that prospects are also good for the River Breaks region, which lies just south of the Missouri River and west of the Mississippi River from Osage County east to Jefferson County and south to Cape Girardeau County. “This region encompasses some of the state’s best turkey habitat, and its counties consistently rank among the highest in spring turkey harvest,” he said.

HUNTING SAFETY
Isabelle stressed that hunters can avoid the main cause of turkey-hunting incidents: mistaking or being mistaken by another hunter for game.

“Most turkey hunting incidents involve hunters who fail to positively identify their targets,” said Isabelle. “Before pulling the trigger, be absolutely certain that what you are shooting at is not only a turkey, but a legal turkey, which would be a male turkey or a turkey with a visible beard during the spring season.”

He also advised hunters to wear hunter-orange clothing when moving through woods or fields, particularly when hunting public land, and to always know the locations of all members of a hunting party. “Many turkey hunting incidents actually involve members of the same hunting party,” said Isabelle. “If you’re hunting with someone else and you split up, be certain you know where your hunting partner will be.” 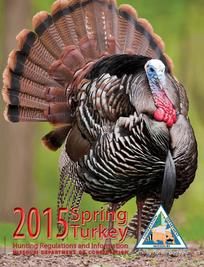 Get more information from MDC’s 2015 Spring Turkey
Hunting Regulations and Information booklet available
from MDC offices and nature centers, other places where
permits are sold, and online at mdc.mo.gov/node/4066.