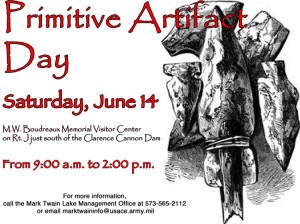 The U.S. Army Corps of Engineers and the Northeast Missouri Archaeological Society are hosting the Annual Primitive Artifact Show at the M.W. Boudreaux Memorial Visitor Center on Saturday, June 14th, 2014. Members of the Northeast Missouri Archaeological Society will be showcasing their amazing collections from 9:00 a.m. and 2:00 p.m. Admission is free! You can also learn to throw an atlatl.a device for throwing a spear (or dart) usually consisting of a rod or board with a groove on the upper surface and a hook, thong, or projection at the rear end to hold the weapon in place until its release. Its purpose is to give greater velocity and force to the spear. In use from prehistoric times, the spear-thrower was used to efficiently fell animals as large as the mammoth. (The atlatl became a legal method for taking deer in Missouri for the first time in 2010, when hunters were allowed to use the weapon during the firearms deer season. A year later, Luke Boenker of Maryland Heights became the first person known to actually have taken a deer in Missouri with the weapon.)

The event originally began in the original M.W. Boudreaux Visitor Center more than 2 decades ago. Here are 4 photos of exhibitors and attendees from the 1991 show. 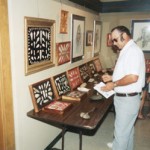 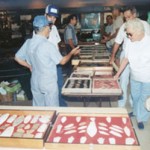 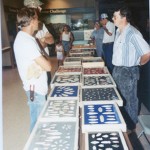 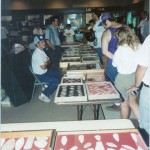 The M.W. Boudreaux Memorial Visitor Center is located on Rt. J just south of the Clarence Cannon Dam. If you would like more information, please contact the Mark Twain Lake Management office by email marktwaininfo@usace.army.mil or call 573-565-2112.