MARK TWAIN LAKE – In baseball, one of the rarest feats of all is the unassisted triple play. Conditions must be perfect and you have to have just that right combination of luck and skill. Few people ever see one and only a handful have actually had the thrill of completing the ultimate of all baseball plays.

But in Missouri, the unassisted triple play is no big deal. In fact, each spring, thousands of sportsmen complete their own version of the Missouri outdoor triple play at Mark Twain Lake. Just like their baseball counterparts, conditions have to be perfect and they rely on that elusive combination of luck and skill.

But, trust me, the odds are much better.

The Mark Twain Lake outdoor triple play is well known among locals, who mark their calendars for mid-April and early May — that magical time of year when the turkeys are gobbling, the crappie are biting and the mushrooms are sprouting. Toss in some quality time camping, boating or hiking at Mark Twain Lake and you have heaven for people who enjoy the outdoors.

Turkey hunting in Missouri ends at 1 p.m. each day, leaving your afternoons open to complete the other two legs of the triple play. It’s tough to beat early morning in the turkey woods, followed by an afternoon of crappie fishing or mushroom hunting. Mark Twain Lake offers it all…and much more. 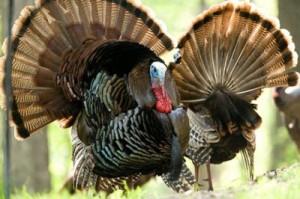 Long recognized as offering some of the best turkey hunting in the country, Missouri should provide turkey hunters with another banner season this spring. Missouri’s spring turkey season will be 21 days in length (from April 21 through May 11). A person possessing the prescribed turkey hunting permit may take two male turkey or turkeys with visible beard during the season; provided, only one may be taken during the first seven days of the season (April 21 through April 27) and only one turkey may be taken per day from April 28 through May 11. Legal hours are 1/2 hour before sunrise until 1 p.m. Central Daylight Time each day.
Resource Scientist Jason Isabelle is in charge of the Missouri Department of Conservation’s wild turkey-management program. When asked about prospects for this year’s spring turkey season, he pointed to turkey reproduction statistics from the past three years. Observers throughout much of the state reported strong production in 2011 and 2012. That means hunters in these areas can expect to see strong numbers of 2- and 3-year-old gobblers this year.
Residents pay $17 for a spring turkey tag, while a nonresident spring turkey permit is $190.

Thousands of acres of public land around Mark Twain Lake, as well as private land throughout the region, provide great turkey hunting opportunities.

An important component of successful turkey hunting is being familiar with the area you choose to hunt. After deciding where you will hunt, you will want to know the lay of the land and where turkeys are located. It’s a good idea to scout multiple areas. Other hunters, weather, or some other factor may require you to abandon your first choice. Probably the biggest factor for success is having alternatives.

The second ingredient for the spring triple play at Mark Twain Lake is good crappie fishing and this year has the potential of being one of the best in a recent years. Based on fall 2013 surveys, the abundance 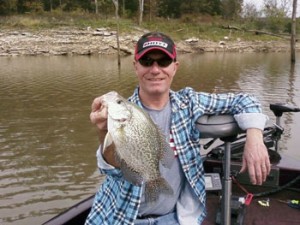 of adult crappie in the lake is very good, and, due to strong year classes in 2010 and 2011 and good growth during 2013, over 45% percent are at least 9 inches long. In fact, the capture rate of crappie at least 9 inches long during the latest survey was the highest ever at Mark Twain Lake. Consequently, this year anglers will find crappie plentiful with four or five of every ten fish exceeding 9 inches long.

Although not nearly as predictable as turkey hunting or crappie fishing, scouting the woods around Mark Twain Lake for morel mushrooms in the spring can still provide plenty of rewards when conditions are right — and it’s a free activity that the whole family can enjoy.

Generally, a warm, wet spring will help improve chances of finding the tasty treats. Look in shaded areas with plenty of moisture. Once you 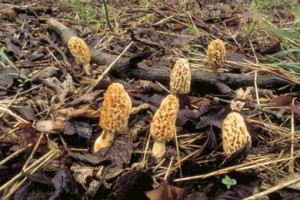 find one, keep looking because it most likely has friends — sometimes lots of them! Pay attention to the type of area where you find morels and search out those conditions in other locations. It takes a sharp eye and a willingness to think like a mushroom. Before you venture afield, make sure you study up on the different types of mushrooms so you don’t bring home the inedible types.

Perhaps the best reward of all of a successful Missouri’s triple play comes at the table, where a meal of fried turkey breast, crappie fillets and a mess of mushrooms is tough to beat.

Located in Northeast Missouri, Mark Twain Lake covers 18,600 acres at normal pool and is surrounded by 38,400 acres of land managed by the U.S. Army Corps of Engineers. Much of the land around Mark Twain Lake is open to public hunting for turkey, dove, quail, rabbit, squirrel, deer and waterfowl.

The lake, the largest in North Missouri, provides a variety of fishing opportunities for crappie, largemouth and smallmouth bass, catfish, bluegill, walleye, carp and others.

The lake was formed in 1984 when the $308 million Clarence Cannon Dam project was completed, transforming the Salt River Valley into Missouri’s fifth-largest reservoir.

There are 14 public use areas scattered around the shore of Mark Twain Lake, containing two marinas, 10 public boat ramps and a number of day use facilities. There are also more than two dozen hunter/fisherman parking lots on the lake. Private lodging, campgrounds, bait shops, restaurants and other attractions are available throughout the lake area. For Mark Twain Lake information, go to ExploreMarkTwainLake.com.