This article about the former village of Victor was written by Juanita Yates of Monroe City and appeared in a now defunct publication called the Mark Twain Pilot House.
On a cold day, January 8, 1977, a sale took place that can never be repeated.
Standing in the snow covered yard of Mrs. Ben (Oneva) Blair, auctioneer Jim Dowell opened the dispersal sale with these words: “When Mrs. Blair leaves this little town of Victor, a way of life goes out of this valley forever. You are watching history being made.”

Mrs. Blair was the last resident of the little village of Victor, located two mile west and one ­fourth mile south of the junction of Highway 154 and 107 south of Florida, Missouri.
No more.
Victor has been relegated to the county history books and a spot on a well worn map. Where it once was is now covered with the waters of Mark Twain Lake. 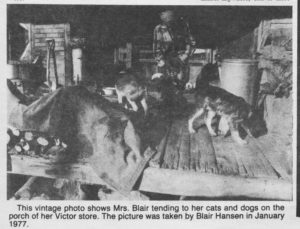 This vintage photo shows Mrs. Blair tending to her cats and dogs on the porch of her Victor store. The picture was taken by Blair Hansen in January 1977.

The sale took place at the last store in Victor, which was also the home of Mrs. Blair. She liv­ed in one room in the back of the store. At the time of the sale, Mrs. Blair took care of herself and walked two miles each day to feed her cattle. If there was snow on the ground, this tiny, elderly woman simply swept a path with her broom.
The sale was interesting to those who had known Victor in earlier days when it was a flourishing trading post and main road from Paris and Perry. When Highway 154 was built one ­fourth miles north of Victor, the town no longer was the important place it once was.
At one time the little store was run by Mr. and Mrs. Will Hat­tersly, Grandpa and Grandma, to the people who lived in the village of Victor.
There was also an apiary, pro­viding honey for the area people, run by Del Calhoun. Another necessity of bygone days was there in the blacksmith shop run by Ed Long.
Victor was a gathering spot for the people in the area. They would tie their horses to a hit­ching rack, go to the store for supplies and for good old coun­try visiting.
At one time in the early 1900’s, a Union Church was located in Victor. Because of religious dif­ferences, it split and a Christian Church was built there while the former church became the Methodist Church. Both these were torn down long before the day of the sale.
Some of the items at the sale were from such a long time ago, neither the auctioneer or the peo­ple who came knew what they were. Sold were a Daisy churn, vinegar band pump, neck yokes, muzzle loader, over and under guns, wooden cane stripper, and single trees from the days of horses and buggys.

Mrs. Ben (Oneva) Blair in a 1977 photograph by Blair Hansen.

Mrs. Blair moved to Paris to make her home after the sale.

Some of the people there reminisced about what a pretty spot it was in the springtime with the flowering trees, the hills covered with green, a beautiful pastoral scene. There are memories still of Victor, a little rural valley where people of the area lived and lov­ed. But the town itself is no more. Only the water is there, flowing silently over the spot that peo­ple called home.
Laughter from vacationers, boaters, exclamations of delight from lucky fishermen, these are now carried by the wind and waves. One way of life has made way for another.
I'd love to receive a Mark Twain Lake Vacation Guide!